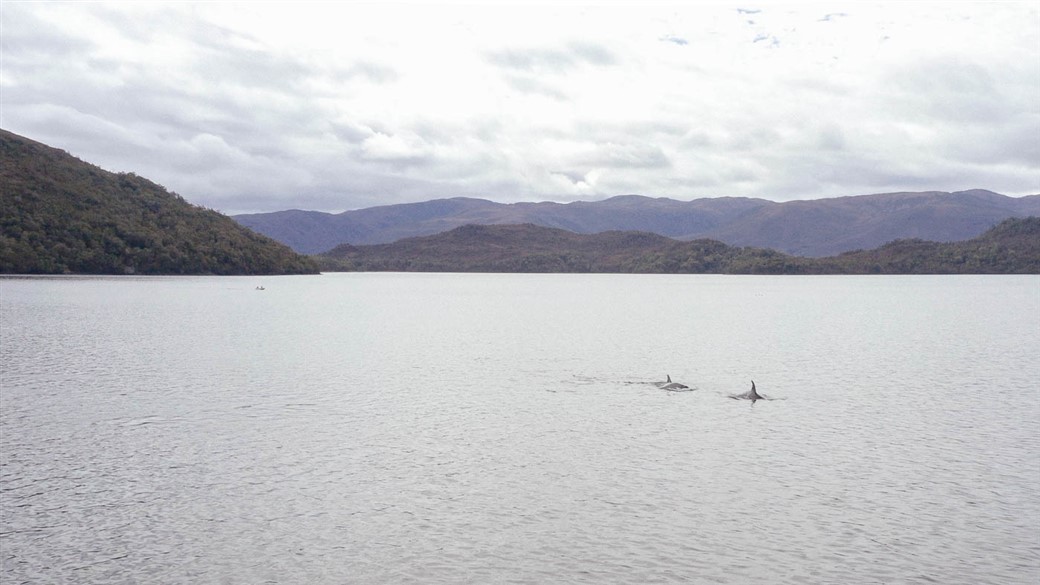 Blogpost by Will Darwin

We’re having a very exciting time out here! On one of our first days at sea we saw a Blue whale, the biggest animal in the world. It was incredible. Since then we’ve seen Dusky dolphins, sea lions and two separate Killer whale packs! We’ve got some great hydrophone recordings thanks to the Ocean Sonics icListen hydrophones we’ve been using. Listen to the Orca recording below as an example.

The second Orca group we think were actually feeding when we saw them: Keri has a photo of what seems like seal intestines hanging from one of the Orca’s fin, and we could hear them using echolocation on the hydrophone. Sadly we haven’t found any Sei whales yet, but we have found a few new corpses on beaches. Keri thinks the timing may be slightly off.

The drone (a DJI Mavic 2 Pro) has been extremely useful so far, it can get to animals miles away and take detailed photos and footage, which Izzi (the trip’s marine behaviour expert) has been using to identify behaviours and groupings. We’ve also been using the drone to map the various beaches and coves where the Sei whale corpses are found, so we can monitor how they change over time. I managed to get additional LIDAR/photogrammetry gear (which can be used for getting accurate measurements of whale lengths from photos) working on one of the drones after hours of soldering and programming, but annoyingly so far it doesn’t seem to be very accurate. I think it will need calibration/tweaking to become accurate enough to give useful scientific data. Its’s 5% or so out at the moment, and the drone’s inbuilt altimeter seems to be giving slightly better results. Maybe I’ll have a play with it when we get back to Puerto Eden and internet. I managed to crash the drone once (that tree came out of nowhere!), but luckily it walked away with only a broken propeller. Landing on the boat can be pretty hairy in the wind & swell, but my well-trained team of assistants (Greg and Annika) armed with face masks and gloves have brought it to safety every time.

Life on board is good fun. We anchor up in shelter every night and spend most days cruising around the local area until someone sees something interesting (like a whale), at which point everyone frantically runs up onto deck and into the dingy to film, take photos and drop the hydrophone in the water. The other day we walked to a lighthouse which was a great all day hike, but other than that we haven’t spent much time on land. We also take samples from the water every now and again. Usually plankton but we also have a few samples of krill, crabs and munida, which are basically tiny lobsters. Keri dropped a jar of munida and they all went flying – there’s still one missing on the boat somewhere which will presumably start rotting soon!

We’ve got a few days left out here, then we’re coming back to Puerto Edén. My original post-trip idea was to head straight off north somewhere warmer, but I’ve had an interesting change of plans. I was looking over a map of Patagonia that Annika lent me, and I found a whole area named after Charles Darwin (a proud relation) near the Straight of Magellan – there’s Darwin Island, Mount Darwin and an entire Darwin Range, where the Beagle passed through. I thought I should probably visit these seeing as I’m in the area (kind of). It’s all miles away from any kind of roads or civilization so the only way to get there is by boat. In a fortunate turn of events it turns out Keri and Greg are sailing there mid-January with a couple of friends, and have kindly agreed to bring me along if I help out on board (and give them some drone flying lessons!). I’m currently reading the Voyage of the Beagle to get me in the mood…

One Reply to “Whales, Orcas and Life on Saoirse and in the Golfo Tres Montes”